We should all eat what we shoot, so knowing how to barbecue game is an essential skill. Here is my useful guide which will show you how to prepare game for the barbecue and the perfect technique. I’ll also cover the right cuts to use too.

How to barbecue game

Although having people round for a BBQ is generally seen as a casual event, planning ahead and being well organised is a must if you want to perfect your skills on how to barbecue game. Make sure that by the time you throw your first piece of meat on the hot grills you have everything else ready (resting trays, roll of foil to hand, serving platters, plates, cutlery, side dishes, sauces, bread and, of course, the wine).

The right tools for the job

I always travel with my set of cooking tongs as surprisingly many houses don’t have them. They are vital for refining your technique on how to barbecue game and it helps if they are at least 40cm (16in approx) in length to give you some distance from the heat. Do not use a fork to turn or touch the meat as the prongs pierce it and let the juice escape. Do acquire a decent wire brush to keep your grills clean and help prevent food sticking.

Most would agree charcoal beats gas but which charcoal to use? Many prefer lump charcoal rather than briquettes as it lights quicker, burns hotter, is more natural and produces less ash, but I am happy using either. Do not start cooking until the coals have a grey covering of ash; they are at their hottest then. You want the charcoal to have turned white, which can take up to 40 minutes. If you are cooking for a big party, experiment beforehand so you know how far in advance to light it up.

Don’t be parsimonious with the amount of charcoal you use, bearing in mind that there is no quick way of getting more heat once you have started cooking. It is useful to keep areas at different temperatures. This can be achieved by stacking up the coals in one section and having only a spattering in another. If you want to know a secret technique on how to barbecue game, the cooler parts are useful for cooking thick pieces of meat or if the meat keeps flaming. The hot parts are perfect for searing and cooking thinner cuts quickly making it taste much better.

Choosing and preparing the meat

You can grill pretty much all game but some types do work better than others. I find snipe and woodcock just too lean but grouse, pheasants, partridges, hare saddles and venison legs and fillets can yield delicious results. As cooking over coals is a short process it is important to use tender cuts that don’t require long cooking times. These include the breasts of birds and the loins and legs of larger animals (when butterflied).

Spatchcocking is a useful skill to have. It involves removing the main carcase of a bird and flattening it, which allows for more even and quicker cooking. Having spatchocked, I always make a few cuts in the legs so they cook at the same time as the breasts.Butterflying is another technique useful for the bbq. This involves removing bones and flattening the meat by cutting it almost in half and folding it out. It works very well with legs of venison provided you remember to trim off any tough sinews once you have removed the leg bone and butterflied out the meat. All of these methods of cooking will help you understand better how to barbecue game. Game from your freezer makes excellent barbecue fare, providing you prepare it properly to avoid dryness.

Marvels and myths of marinades

A marinade’s job is to add flavour to the meat but, contrary to some beliefs, it does not tenderise. The best way to make sure your meat is tender is to choose the right cut and cook it skilfully. The dense texture of meat means marinades don’t really penetrate much beneath the surface. Oil is important in marinade as it helps form the crusty seal, keeps the meat moist and prevents it sticking to the grill bars. Acids such as vinegar, citrus and yoghurt can cause it to become mushy so try not to add too much. (Read this recipe for a cajan-style marinade for venison steaks.)

Salt is essential in marinades as it can flow through the meat and release moisture within the cells. The benefits of most marinades occur within a couple of hours, making sure the meat is game for a barbecue. However, for convenience, you can leave the meat to marinate overnight provided the marinade isn’t too acidic.

Cooking on a BBQ helps create a smokey flavour and really strengthens the flavours.

When should you remove meat from the fridge? When cooking small cuts that are best served slightly pink, such as pigeon or partridge breasts, I tend to cook them from fridge- cold as they char nicely on the outside but are not so quick to cook right through, making them more game for a barbecue. The same applies to lamb and veal chops. Larger pieces such as butterflied venison leg or meat that you want to cook fully through – pheasant comes to mind – should be brought out around 30 minutes before cooking and left to stand at room temperature, making them more game for a barbecue. When ready to cook, sear the meat on the hot part of the grill to lock in the juices and help form a tasty crust; the meat will naturally lift on the grill when ready so don’t give in to temptation to pull it off. Clean grills help prevent the meat sticking but if you are having trouble you can brush a little oil on to the meat.

Place food in rows on the grill; this makes it easier to remember which pieces have been turned and what stage each one is at. Start by placing food at the back just in case anything flares up while putting the next piece on.

Once cooked it is vital to rest the meat, allowing the juices inside to redistribute themselves and help diminish their running out when sliced. 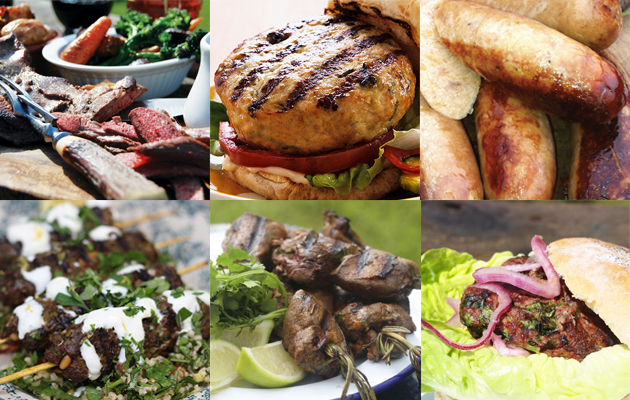 Besides tasty side dishes and decent bread, sauces are an essential part of a successful BBQ. Seasoned yoghurts, herby oils, fresh salsas, homemade horseradish or homemade mayonnaises are all excellent. You can find my favourite barbecue recipes here.