We have the correct water temperature in the UK and bobbing seals to feed them with. Could Great white sharks be lurking in our waters?

Duuh-dum. Duuh-dum. Find the sea and you’ll find great whites. And we have lots of seals now.

Great white sharks in Britain could be a worry with the increasing population of seals. Contrary to popular conception sharks do occur around the coasts of Britain. There are over 30 species, including some of the fastest, rarest, largest and most highly migratory sharks in the world. But are any of these sharks under threat? Or are we under threat from them?
Man’s fascination with the romance of the man-eater may be the most dangerous aspect of his interaction with predatory animals, glossing over the nasty, bloody bits. For the ones to avoid read Man-eaters. When man is on the menu. And for more tasty shark features watch our video on fly fishing for sharks. 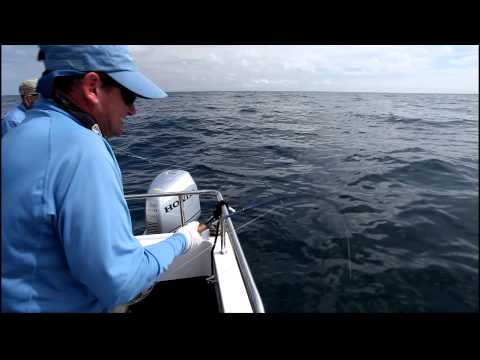 There is no need to visit to tropics for straining lines and game fish, the Irish Sea holds exciting fishing…

Remember, you read it here first. Great white sharks are swimming off the British coastline, just waiting to clear the beaches and frighten holidaymakers to death. I’m talking about the real thing: film star, man-eater, the largest shark of all. Carcharodon carcharias. The white pointer. White death. Fantasy? I set up a month-long hunt for the British version of Amity, with Sky TV backing, a couple of years ago. Didn’t happen for various reasons. But you don’t convince a television company to back a hunch unless there’s pretty good evidence that the final product will contain more than some scary music and library footage. So could there be Great white sharks in Britain?

Steady on. This is making me sound like a cross between Vasco da Gama and David Attenborough. Like most journalists, I never put in any of the research, observation and scientific nous. Just sat back and prepared to take the glory. All the credit when a British great white is definitively identified should go to a Scottish custom rod builder and sometime boat skipper who told me all about it. The man (let’s call him Jimmy, because he wants to remain anonymous) has always been fascinated by exotic species such as swordfish, tuna and, most of all, sharks. Some years ago, he postulated that porbeagle sharks, far from being summer visitors to Britain, were around Scottish waters all year.

Experts scoffed. Then his boat landed a 414lb porbeagle in March 1992, a fish that still holds the International Game Fish Association world record for 50lb line. The following year, again in March, one weighing 507lb was caught off Caithness. It is still the world record. Suddenly, Jimmy was no longer a nutty Jock. Porbeagles are the second most common large shark found around the British coast. But there has never been a white pointer. True, there’s a bit of difference between porbeagles and great whites, though they’re similar in appearance. And you’re probably thinking: surely the ones that attack people are exotics, at home in Australia but not dumb enough to venture into our chilly waters. The great white, however, is not a predator of tropical beaches. The much-publicised Australian attacks take place along the cool or temperate southern coastline, not the warmer climes of the Great Barrier Reef. However, are there Great white sharks in Britain? The area we were focusing on, off Scotland, has exactly the same water temperature as places where large concentrations of great whites are found off South Africa, New Zealand and Australia.

A lurking Blue shark spotted off the coast of Cornwall.

But water temperature is only one factor. The Orkneys are home to an estimated 25,000 grey seals and 7,000 common seals, the largest concentration in Europe. Seal colonies mean fine dining for great whites. “Find the seals and you’ll find the sharks” was the mantra of the late Vic Sampson, a Londoner who caught more great whites than anyone in the past 50 years. (It’s why surfers are commonly attacked by great whites. In wetsuits, they look like seal meat.)
Richard Peirce, chairman of the Shark Trust, claims that conditions and availability of prey make British waters an ideal hunting ground for this alpha predator. “The real surprise is that we don’t have an established white shark population, because conditions here mirror those in parts of South Africa, Australia and northern California,” he said. “Research has shown that white sharks tolerate water temperatures in a range which would make British waters perfectly suitable for this species.”

Peirce believes they could be “occasional vagrant visitors”. But Jimmy is far more certain. For more than 30 years, he has kept meticulous records that show several in-stances in Scottish waters of shark sightings that could only be great whites. Most of these have been noted by divers, with the occasional spotting by commercial fishing boats. One typical instance is of two divers being circled by a very large shark, way bigger than any porbeagle. “We had no idea what it was, but we estimated it at 13ft to 14ft long. We had never seen a shark anywhere near that big. It made us very nervous. We got out of the water as quickly as we could,” their record shows.

If you’re now feeling nervous about even getting your toes wet at Southend, Stranraer or Swanage with fear of Great white sharks in Britain. I should add that all the reliable sightings have come from the far north of Scotland in generally unpopulated areas used only by pot fishermen and the occasional diver. Even so, you may wonder how a fish as large as a great white (there have been records of them exceeding 21ft) could possibly have remained undetected. But a thriving New Zealand population of great whites was not discovered until the mid-Seventies (and close to a seal colony). They spend most of their time in the open ocean and are great travellers; one that Sampson caught and tagged was captured a year later, 2,000 miles away.

Great white sharks in Britain is by no means impossible. At least 20 species of shark are found in British waters, though some such as smooth hammerhead, shortfin mako and frilled shark are only occasional visitors, with rare specimens turning up in trawl nets. The late Trevor Housby, one of the pioneers of big-game fishing around the British coast, once caught a salmon shark off the Isle of Wight, a species most often spotted dining on the vast salmon shoals off Alaska and British Columbia.

Then there are the exotics such as six-gilled, kitefin, lantern and gulper sharks that lurk in the deepest water and are rarely seen. The former can grow to 16ft and while a few anglers have caught one (a Swiss, Joe Waldis, landed one of 1,056lb off Co Clare in south-west Ireland in 2009. It is still the largest fish ever taken on rod and line from British waters), their real attraction to fishermen is their vast bulk, rather than their sporting qualities.

The kitefin, lantern and gulper, though they masquerade under the carchariidae banner, merely pretend to be scary. Several of those 20-odd British “shark” species fall into this category. Lesser-spotted dogfish, smoothhounds, spurdogs and bull huss may be shark-shaped but they rarely grow to more than 10lb and are commonly categorised as dogfish.
They were once a common sight on fish slabs under the all-embracing “rock salmon”. This catch-all term meant you could be eating conger eel, monkfish or dogfish; in fact, anything too unattractive to sell to the public without its skin off. The Trade Descriptions Act put paid to that. The only danger that dogfish pose to man is their abrasive skin, once used as sandpaper and still popular with luthiers.

In between dogfish and true sharks is the tope, a sporting fish that has sharky features but grows to perhaps 90lb. Many of the largest are captured off Essex. They’re quite common and in some places, where there is deep water close to shore, they can be caught from a beach.
One of the four common British sharks, and the world’s second-largest fish after the whale shark, looks very scary. The sight of its triangular black fin cutting through the water would cause misgivings in the most confident swimmer. I once saw one swimming around St Ives harbour in Cornwall, and a few late holidaymakers screeched: “Shark! Shark!”

The plankton eating Basking sharks have been known to terrify British surfers.

Great white sharks in Britain might not be common, but the basking shark, typically 20ft to 25ft long, is totally harmless. It is a filter feeder, eating only plankton, and though it may send the hearts of waveboarders or sea kayakers fluttering, it’s about as dangerous as a hedgehog. Probably less so. Gavin Maxwell, author of Ring of Bright Water, tried to set up a business off the Hebridean island of Soay, catching basking sharks for their oil-rich livers.

During very hot summers, it’s not unusual to spot an elegant thresher shark cruising on the surface, often close to shore. A few years ago, there was panic around Bournemouth
as threshers hunted the mackerel shoals, occasionally leaping clear of the water. The thresher can grow to 20ft but half its length is a sickle-like tail that it uses to stun its prey. It has a small mouth and no attacks on humans have been recorded. The British record is 323lb. The easiest true shark to catch around UK waters is the blue, named after its vivid cobalt back. A thriving Cornish industry once took hundreds of holidaymakers out from Looe, Mevagissey and St Mawes to fish for sharks. In truth, the expectation was greater than the experience. The tackle used would have handled a marlin, let alone a small and not very powerful shark that rarely topped 100lb.

There was worse to come. The sharks were clubbed to death and transported back to the quay, where they were hung on weighing scales, the macho angler posing alongside. Then the sharks were chopped up for crab-pot bait or dumped in the sea. I once hooked a rotting shark carcass while fishing for mullet by the lighthouse jetty at Mevagissey – the only time I’ve caught a 50lb shark on 6lb line. Such practices were appalling. Fortunately, fishing skippers and anglers have learnt the word “conservation”. However, an even more destructive predator started to prey on blue sharks around the time that anglers began returning their catches. The EU, particularly Spain, is one of the world’s largest suppliers of shark fins to East Asia. According to the Shark Alliance, a coalition of non-government organ-isations dedicated to shark conservation, the longliners’ catch is typically 80% blues (though they range way beyond European waters). Whereas once you might catch a dozen or more blue shark in a day, catches have dropped alarmingly. The French, in particular, are partial to shark meat and sources tell me there’s a “black” industry in several ports: cash, and no questions asked, trading in blue sharks.

With regard to the fear of Great white sharks in Britain. If you’re thinking about a cross-Channel swim, surfing off Cornwall or even dangling your fingers from the side of a boat, there’s no reason to fear British sharks. The nearest great white is probably 1,000 miles or more away, and the only other known man-eater you could possibly encounter, the mako, is a rare visitor to British waters. However, if global warming becomes reality, if our traditional species such as cod head for cooler climes and warm-water fish fill the void, then maybe we could one day see tiger sharks off Torquay, hammerheads off Hastings or bull sharks around Battersea. And great whites? Trust me: they’re here right now. You just need to know where to look. Happy swimming.