The essence of hill stalking 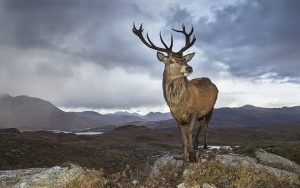 If the essence of hill stalking is the hunting of wild deer in wild places, then there can be few places in Britain so wild or remote as the islands and West Coast of Scotland, says Graham Downing. For more on stalking, take our advice on the essentials you mustn’t take to the hill without, read deer stalking: 10 things to take to the hill when stalking. Keen to join our tradition? The Field has been the ultimate sporting journal since 1853. SUBSCRIBE today and get your first six issues for JUST £6 by clicking on THIS link. HILL STALKING That there have been deer on the Hebrides since ancient times is beyond doubt, though how they got there has until recently been something of a mystery. Arran stags are known to be able to swim the 5km or so to the Kintyre peninsula, so it is no surprise that the inner islands were colonised by red deer from mainland Scotland. But it would be a tough challenge for the strongest beast to make the 30km crossing from Skye to Harris in the Outer Hebrides. It has only been with the advent of DNA analysis of ancient deer samples that it has been shown that the red deer of the outer Scottish islands are the result of introductions by Neolithic people. Where these Stone Age folk brought the deer from, however, is still a mystery, as they were genetically distinct from those of the Scottish mainland. On the single island of Lewis and Harris, deer have traditionally been confined mainly to the high ground of North Harris, a rugged, rocky place of mountain, moorland and sea loch that until 2003 was managed as a traditional sporting estate. In that year the Bulmer family sold the 25,600-acre North Harris estate to the local people under a community buyout scheme. COMMUNITY STALKING CLUB “The community was not interested in Amhuinnsuidhe Castle, so the estate was split in two and the castle was sold off with the salmon fishing rights and a small parcel of land,” says Gordon Cummings, manager of the North Harris Trust. “Our community stalking club now manages hinds across the whole of the estate. The area is split up into beats; there are about 30 club members and they operate an online booking system when they want to go stalking. The members take the venison for the freezer but really it’s all about getting the local community engaged in how we manage the estate.” Amhuinnsuidhe, however, takes 30 stags a season from the North Harris Trust and offers guests stalking across North Harris. “We can accommodate up to 18 guests in the castle, which was fully restored 14 years ago, and we also have a cottage that sleeps six,” says Amhuinnsuidhe’s estate manager, Innes Morrison. “We can take two to three guest rifles out each day. The ground runs up to about 1,500ft and it’s very challenging stalking, but the scenery is spectacular and you can see right out … Continue reading The essence of hill stalking

Copy and paste this URL into your WordPress site to embed

Copy and paste this code into your site to embed