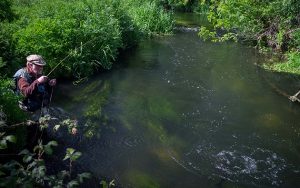 Duffer’s Fortnight is apparently the magical times that even a duffer can catch monster trout. But having the right Mayfly kit certainly helps. So take Charles Rangeley-Wilson’s Mayfly MOT to ensure you have everything you need to suceed. For more on the Mayfly, it’s important to know when to cast and when to stay calm. Follow our advice, read how to catch big trout: monster munchers. And if you are adding to your bucket list, follow our guide to the top 10 trout rivers. MAYFLY KIT It’s known as Duffer’s Fortnight because, for a blessed window of time between mid May and early June, the allegedly educated trout of the English chalkstreams become so easy even a duffer can catch them. Despite a long trawl (upstream, of course), I’ve not found the exact origin of the phrase, though “duffer” comes from the Scots word dowfart, meaning stupid. Fishing writer Chris McCully thinks it started with Charles Cotton, who wrote that “with the green drake [the mayfly] and the stoneflie I do verily believe I could some daies in my life… have given over upon the meer account of satiety of sport.” Easy fish, then. Some disagree valiantly with the parody. Legendary riverkeeper Frank Sawyer said that “time and again the mayfly season had proved wrong the old saying Duffer’s Fortnight”. Author John Waller Hills, too, thought that for every day when the fish “mind neither thick gut, nor bad casting, nor wretched imitations”, there are many more when they are “wonderfully difficult”. The fishing can be capricious for sure but I think that’s mostly because “rough winds do shake the darling buds of May”. And because there’s only so much trout can fit in their bellies. When they’re full they get torpid, just like people do. Hills thought the fourth and 12th days the best and he wasn’t far out. The days before and between are explained first by bemusement at the size of the platter and later by the belly-pain of gluttony. Time your foray right, however, and there’s no getting away from it: for a few days each year, if you want to catch a trawler-full, you probably can. Mayfly is the time when the flies are bigger, the rises are more extravagant and the fish really are less discerning. It’s also when the big fish come out to play and that’s what makes mayfly really interesting. Duffer’s Fortnight may well bring to mind an image of the bumbling beginner on the banks of the Avon, the Wylye, the Kennet or wherever, his hands trembling as he ties on some piece of plughole fluff because the biggest fish in the river is cavorting around in front of him like a girl in an Amsterdam window. But we’ve all been there. I can recall times when I’ve found vast fish feeding with such gloopy abandon my eyelids have started to quiver in nervous anticipation. On 17 May 2016 I broke off a six-pounder and actually chewed the ground to … Continue reading Essential Mayfly kit: demystifying Duffer’s Fortnight

Copy and paste this URL into your WordPress site to embed

Copy and paste this code into your site to embed